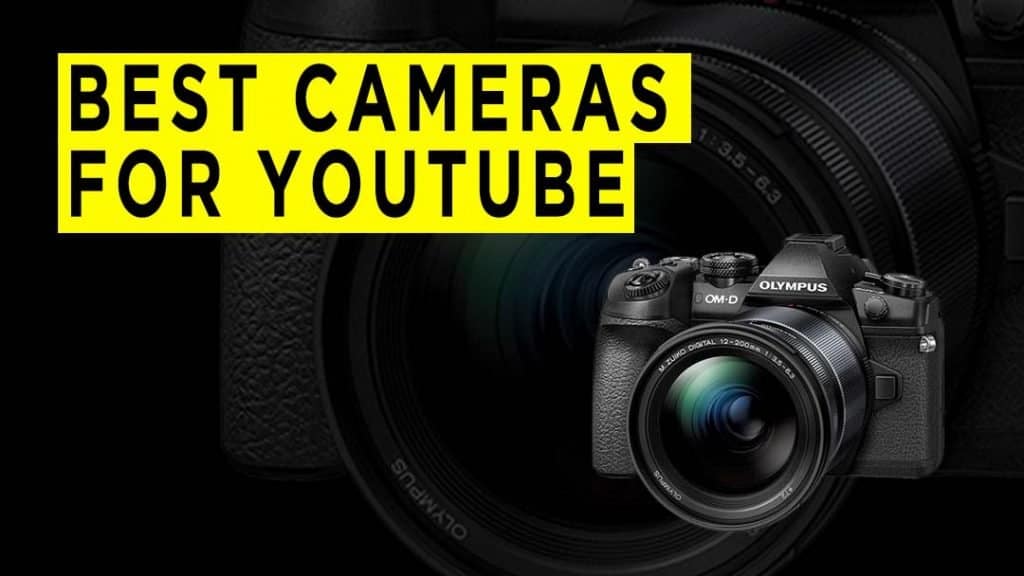 In today’s market, if you want to become the next superstar on YouTube, you’ll need more than just a great idea and a unique concept.Every day, new aspiring creatives flock towards the platform and begin publishing content. And what once was a  casual social site, is now a reputable platform for high-quality content.

And because of the platform’s popularity today, viewers have high expectations for creators. The easiest way to separate yourself and gain a following is to create high-quality content with excellent production value. For aspiring creators, the most important thing you can do is invest in a good camera. Regardless of your goal and niche, a quality camera will provide the HD videos you’ll need to succeed. With that, we’ve compiled a list of the top ten best cameras to start a YouTube channel.

Canon EOS RP is their first budget entry-level full-frame mirrorless camera to sit alongside the flagship EOS R. Initially released in the spring of 2019, it features a 26.2-megapixel CMOS sensor, the DIGIC 8 image processor, 4K video up to 24 fps, and 1080p full HD video up to 60 fps. It also has a 3.0-inch fully articulating screen, weather sealing, time-lapse, zebras, HDR, USB charging, wireless connectivity, and headphone and microphone inputs.

It obtains a similar autofocusing system as the EOS R with a total of 4,779 AF points covering 80% of the frame. This system also offers Canon’s Dual Pixel CMOS AF as well as Face + Tracking and Eye detection. And at 440 g body alone, it’s the smallest and lightest full-frame camera Canon’s released so far. Yet, one that provides their acclaimed color science, intuitive interface, and excellent design.

Overall, Canon’s EOS RP is very much a mirrorless update to their acclaimed 6D, with a new design and extra functionality. It’s a straightforward and easy to use camera that inherits much of the capabilities as the pricier EOS R, without its price. And despite that, it remains the most affordable full-frame mirrorless on the market to date with refreshing features at an insane bargain.

Panasonic’s GX8 is arguably the most advanced LUMIX camera they released at the time. Initially released in the fall of 2015, it features a 20.3-megapixel MOS sensor, 4K video up to 30 fps, and 1080p full HD video up to 60 fps. It also has a 3.0-inch fully articulating touchscreen, image stabilization, time-lapse, zebras, HDR, a microphone input, and wireless connectivity.

It uses a 49-point contrast-detect AF system with Panasonic’s Depth from Defocus technology, which offers Face detection and tracking. Unlike the rivals, it obtains Panasonic’s Cinelike profiles, for flatter footage with increased dynamic range. The North American version of this camera also offers unlimited video recording, a bonus that’ll allow you to record as long as your battery and SD cards allow.

Overall, Panasonic’s GX8 obtains a strong selection of advanced video-centric features from their flagship GH4. And it marks a notable improvement over its predecessor with the addition of stabilization and superior autofocusing. And it remains another excellent all-round camera in Panasonic’s lineup.

Panasonic’s G95 (or G90 outside of the United States) is their latest mid-range mirrorless camera. Released in the fall of 2019, it features a 20.3-megapixel MOS sensor, the Venus Engine processor, 4K video up to 30 fps, and 1080p full HD video up to 120 fps. It also has a 3.0-inch fully articulating touchscreen, log profiles, image stabilization, weather sealing, time-lapse, HDR, zebras, USB charging, wireless connectivity, and headphone and microphone inputs.

It uses a 49-point contrast-detect AF system with Face Detection, a similar setup as the GX8. However,  it’s the first camera in the G series to obtain Panasonic’s V-Log profiles for improved dynamic range and added flexibility during post-processing. And this camera also offers unlimited video recording.

Overall, Pasnaonic’s G95 stays true to the original G series ideal and remains equally competent for both stills and video. And it’s a well-designed and responsive camera that provides a solid feature set for the price.

Canon’s EOS 90D replaces the acclaimed 80D with a full overhaul in existing capabilities. Released in the fall of 2019, it features a 32.5-megapixel CMOS sensor, the DIGIC 8 image processor, 4K video up to 30 fps, and 1080p video up to 120 fps. It also has a 3.0-inch fully articulating touchscreen, weather sealing, HDR, time-lapse, wireless connectivity, and headphone and microphone inputs.

It uses a 45-point all cross-type AF system with Canon’s Dual Pixel CMOS AF. And it now features the best implementation of the system to date, with a whopping 5,481 selectable AF points. Canon’s also debuted this camera with the world’s first 32MP sensor, which now makes it the highest resolution APS-C DSLR ever released. Plus, this camera also offers 120 fps recording at 1080p, yet another first for a Canon DSLR.

Overall, Canon’s EOS 90D blurs the lines between traditional SLRs and mirrorless cameras. And it’s a game-changing release that redefines the capabilities of a standard DSLR. With this refresh, Canon’s just released their best APS-C camera to date.

Olympus’ EM-5 Mark III is their latest release in their mid-range mirrorless lineup to sit below their flagship EM-1 series. Initially released in the fall of 2019, it features a 20.4-megapixel MOS sensor, the TruePic VIII image processor, Cinema 4K video up to 24 fps, and 1080p full HD video up to 120 fps. It also has a 3.0-inch fully articulating touchscreen, HDR, weather sealing, image stabilization, time-lapse, USB charging, a microphone input, and wireless connectivity.

It obtains the same 121-point phase-detection autofocusing system from the flagship EM-1 Mark II. This system now also brings along both Face and Eye Detection, for added accuracy. Like Panasonic’s G9, it also offers a sensor-shift stabilization system that delivers 6.5 stops of handshake reduction.

Overall, Olympus’ EM-5 Mark III is an incredibly attractive alternative for those wanting the performance of the EM-1 flagships, in a smaller and more affordable package. And it’s a notable refresh and the continuation of a popular, stylish series.

Sony’s a6600 is their current flagship and the best option in their APS-C mirrorless lineup. Released in the fall of 2019, it features a 24.2-megapixel CMOS sensor, the Bionz X image processor, 4K video up to 30 fps, and 1080p full HD video up to 120 fps. It also has a 3-inch flipping touchscreen, weather sealing, image stabilization, HDR, log profiles, time-lapse, wireless connectivity, and headphone and microphone inputs.

It uses a 425 point Hybrid AF system that covers 84% of the frame. And this system obtains Real-Time AF from their flagship a9, which uses machine learning for superior subject tracking. It also marks one of few cameras on the market that offers unlimited 4K video. Yet, coupled with its new Z type battery, it now offers the greatest battery life of any APS-C sized mirrorless camera to date.

Overall, Sony’s a6600 is the camera that proves their leaders in software innovation. And it combines nine years of refinement into a single package that’s their best all-in-one mirrorless camera so far.

Panasonic’s G9 is the company’s latest flagship camera that’s marketed primarily towards photographers. However, it inherits several high-end features from the flagship GH5, to deliver quite a well-suited package for videographers. Released in the spring of 2018, it features a 20.3-megapixel MOS sensor, 4K video up to 60 fps, and 1080p full HD video up to 120 fps. It also has a 3.0-inch articulating touchscreen, zebras, image stabilization, weather sealing, dual card slots, a full-sized HDMI, USB charging, time-lapse, HDR, wireless connectivity, and headphone and microphone inputs.

It uses a 225-point AF system with Panasonic’s Depth from Defocus technology, which covers nearly the entire field of view. Unlike rivals, it’s one of few cameras in this segment that removes the Aliasing filter from the sensor, which improves fine detail. It also offers sensor-shift stabilization that delivers 6.5 stops of handshake reduction, almost industry-leading. And the distinct Image Stabilization Lock feature that locks the stabilizer to make handheld footage look identical to a tripod.

Overall, Panasonic’s G9 is an extraordinarily capable camera. While it’s the flagship aimed at photographers, it comes hard stacked with features videographers will appreciate. And Panasonic has created a well-rounded, versatile package that’s a breakthrough in their lineup.

It uses a 121-point hybrid AF system, with a dedicated quad-core processor devoted to subject tracking and Face detection. The result creates the best focusing camera they offer outside of the new EM-1 Mark III. This camera also marks the first Olympus camera equipped with 4K video. Yet, Olympus has gone above rivals to provide the slightly wider 17:9 aspect DCI mode with broadcast data rates of 237 Mbps. And combined with its 16 art filters, it can easily create stylistic footage that’s unmatched among competitors.

Overall, Olympus’ OM-D E-M1 Mark II is a substantial improvement over its predecessor. Olympus poured all of their best innovations into this camera, and it shows. Sure, they orient this camera mostly towards sports and action photography. But, unlike the competition in that sphere, it offers a far superior video experience with an advanced focusing system and class-leading stabilization. And in speed and power, it’s mostly unmatched in the Micro Four Thirds realm.

It uses a 225-point AF system with Panasonic’s Depth from Defocus technology. And it now brings a new motion detection algorithm that delivers the best focusing of any camera they’ve released to date. Unlike rivals, it’s one of few cameras that shoots in the higher-end 10-bit color space natively, and it provides broadcast level data rates of 400 Mbps in 4K. And it’s also one of the select cameras that offers unlimited recording time, where the only limit becomes storage space.

Overall, Panasonic’s GH5 is a significant update over the acclaimed GH4. And it continues the groundbreaking tradition of its predecessor and sets new standards for mirrorless cameras. It provides the best features and innovations available in Panasonic’s ecosystem to date. And it holds steadfast as one of the most advanced video cameras in the class that rivals professional-grade broadcast cameras.

Sony’s ZV-1 is a new lineup that departs from their long-standing CyberShot series. And they’ve designed this point & shoot specifically for vloggers and Youtubers. Initially released in the summer of 2020, it features a 1-inch 20.1-megapixel CMOS sensor, the Bionz X image processor, 4K video up to 30 fps, and 1080p full HD up to 120 fps. It also has a 3.0-inch fully articulating touchscreen, log profiles, USB charging, time-lapse, a tally lamp, optical stabilization, neutral density filters, vertical video, wireless connectivity, and a microphone input.

It uses a 425-point hybrid AF system with Real-Time AF for both stills and videos, a similar configuration as the a6600. This iteration also uses machine learning for subject recognition and boasts a class-leading focusing speed of 0.03 seconds. Unlike rivals, this camera provides a front-facing tally lamp to indicate the video is active. Plus, it offers a three-capsule microphone specially designed to capture audio without distractions. And it includes Sony’s new Product Showcase mode, which smoothly transitions between subject tracking and products held in front of the camera, perfect when filming reviews.

Overall, Sony’s ZV-1 sets new standards in the compact segment and is now the leader of this class. It delivers virtually unfailing autofocus, unlimited 4K video, log profiles, a high-quality lens, and a large 1-inch sensor. And compared to rivals in the compact segment, it’s a slam dunk considering this feature set and its price. Sure, it doesn’t provide as large a sensor as rivals on this list, nor does it offer Cinema 4K or 4K 60 fps. However, for Youtubers, this camera is ideal for its ease of use, simple design, and incredible feature set. It provides a straightforward, all-in-one package that will immediately get you started creating high-quality content. And that’s the point.