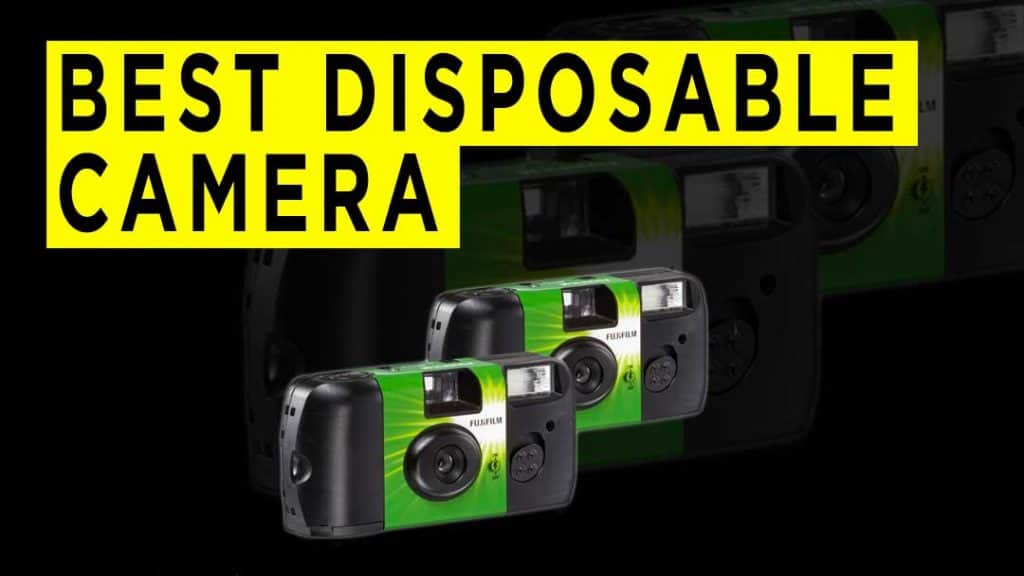 We often overlook disposable cameras in today’s world. And sure, you may have assumed with the creation of digital photography and smartphones, single-use disposable cameras would be gone. Think again. This once upon a time rage has returned in a powerful comeback. And the unique images created from these cameras have kept them alive and well.

And we’ve now seen a new rise in popularity in recent years, particularly amongst weddings and parties. But, they’re also an incredibly low-cost way to get creative with analog photography and experience film. So no, they haven’t lost their charm quite yet. And they’re here to hold a special place in the market.

Today’s models offer even better functionality, such as waterproofing, flashes, sharper lenses, and better automatic modes than earlier models. Not to mention, some of the newest releases are from the finest 35mm film manufacturers in the industry. Yet, they’re equally easy to use and offer a comfortable shooting experience. But with an average price less than a family meal, there’s no worrying about dropping, losing, or breaking them. So it’s easy to capture high-quality photos of priceless moments.

Whether your an existing photographer looking for some needed nostalgia or a beginner interested in film photography, a disposable camera is undoubtedly a solid starting point.  With that, we compiled a comprehensive and detailed guide describing the things to know about disposable cameras. And we’ll also cover the best disposable cameras on the present market.

Released a few years ago, Kodak’s Daylight recently made the international jump across seas. It features 39 exposures, ISO 800 film, and a 32mm lens. This camera doesn’t offer a built-in flash, however. Instead, Kodaks designed this model with sunlit scenes in mind. And it’s perfect for capturing crisp, clear images at outdoor gatherings, landscapes, and memorable scenery. So, if you don’t mind going without a flash, the Kodak Daylight makes a savy outdoors oriented camera.

Known for crisp black and white film, the Ilford XP2 marks one of few black and white disposable cameras. It features 27 exposures, ISO 400 film, and a 30mm lens. This camera does, however, have a built-in flash for extra flexibility and visual flair. And it also provides an extra outside casing to prevent unwanted damages in rough conditions.

So, no matter the scene, the XP2 delivers sharp, noise-free black and white images with excellent contrast and tones. But it’s ideally suited for capturing landscapes and dramatic urban scenes. And if you’re someone who enjoys black and white photography, the XP2 is a solid choice.

Fujifilm QuickSnap Waterproof isn’t your standard disposable camera. No, it’s also an underwater action camera to boast. It features 27 exposures, ISO 800 film, and a 32mm lens. But, crucially, this camera is fully waterproof and rated to a depth of 10m (32 ft). So no fears with a casual dive.

Fuji’s also added a larger than average shutter release, top-mounted film advance, and a rubber wrist strap to make it easy to operate with gloved hands or when the going gets tough. A subtle addition, but one you’ll quickly appreciate. Overall, the QuickSnap Waterproof loads fine grain film into a waterproof design that’s ready to capture moments anywhere, be it watersports or not. Sure, it’s premium, but it’s among the best single-use cameras today, given its versatility.

Kodak’s FunSaver brings new joy and ease of use to the disposable market, plus a sturdy build and gratifying shutter click. This camera features 39 exposures, ISO 400 or 800 film, and a 30mm lens. It also has a built-in flash with a maximum distance of 3.5 meters to add versatility. And Kodaks wrapped the device in a durable casing, ready to withstand the abuse of travelers. Overall, the FunSaver marks one of the brand’s best disposables.

And it’s a popular option for capturing action-packed scenes, namely weddings, and flattering pictures across most lighting conditions that’ll stand the test of time.

Overcast days are a camera’s worst enemy. But, not today with the Fujifilm QuickSnap Flash. It features 27 exposures, ISO 400 film, and a 32mm lens. Unlike other QuickSnap models, this new model now includes a built-in flash with a 3m (10 ft) range and on/off continuous switch to make it easy to take multiple photos. This camera also features a clean, sleek design that leads the market in style and makes it a great travel companion.

Yet, it’s also one of the smallest around and the easiest to use. Overall, the QuickSnap Flash represents the best value for money. And it’s a reliable all-around option that delivers lovely 4×6 sized prints in a variety of shooting conditions.

What is a Disposable Camera? How do they work?

Disposable cameras are single-use point and shoot film cameras. First introduced in the 1980s by Fujifilm and Kodak, these cameras make film photography accessible to everyone. They come in two film options, either black & white or color. And once the images are exposed, you’ll then process and develop them so that you have a selection of physical photos to hold as keepsakes in the end.

However, unlike today’s Instant cameras, they don’t deliver physical prints immediately. But, even so, they’re easier to use, especially compared to a modern digital camera. Simply wind the gear to advance the film, compose through the viewfinder, press the shutter, and voila. That’s it. These cameras remove all of the decisions and, instead, provide a simple shooting experience.

As such, they’re a good option for young children looking to experiment with photography. They’re also a suitable choice as a gift or a second camera for photographers who want a genuinely analog experience. But, ideally, they’re perfect for travelers wanting to capture memories without losing their more expensive cameras. And photographers who prefer the imperfections created by film photography.

Sure the term disposable camera brings to mind a cheap camera that’d only be a last resort. But, these days, disposable camera technology has vastly improved. And in the right lighting conditions, these cameras deliver excellent images. So, if you want to capture print images without getting distracted by technical nuisances, they’re the right choice.

Can you still buy a disposable camera? If so, where can you buy one?

Yes, and you can get them locally at most pharmacies and convenience stores. You can also easily find them online, which is best for buying them in bulk quantities.

Why get a disposable camera?

Even though disposable cameras may not be the initial choice for many budding photographers, their charm is what keeps people hooked. For many, the disposable camera brings a unique sense of nostalgia, especially in today’s digital age. You can capture authentic black and whites, rustic sepias, or faded colors. And the film ascetic is difficult to replicate by editing alone. Additionally, their unique shutter click and film winding noises are extraordinary.

Sure, you can’t upload these photos directly to social media. And they require more effort to develop. But, even so, these cameras challenge photographers to be more creative and decisive. You can only capture a single shot at a time. So every photo you take matters. There’s also a bit of mystery before the big reveal upon developing. So it makes sense why many professional photographers today still opt for these cameras to produce a vintage and timeless feel.

Another reason is that these cameras are compact, easy to use, and low maintenance—there’s no need to charge them or lug around a bulky camera bag. No getting bogged down by advanced controls and unnecessary functions. And that’s not always the case with digital cameras. As such, they’re a better keeps sake for capturing spontaneous one-off moments.

How long does a disposable camera last?

The life expectancy of your camera will depend on how you store it. The best practice is to keep the camera in a cool dark place away from sunlight. Or you can store it in the refrigerator. But, there are also best-before dates on the boxes of these cameras. So, generally, it’s best to use the film by that date to ensure you get quality images.

Another factor that affects these cameras is batteries, particularly in models with a built-in flash. Often, the batteries rust and corrode, damaging the camera. So, to prevent this, remove the battery before storing the camera.

Does the film go bad?

Yes. And the undeveloped film also deteriorates in quality over time, especially in hot climates. This happens because the dyes and color mask disintegrates, causing a magenta hue. To prevent this, store the film in a cool dark place away from sunlight. Otherwise, develop your film as quickly as possible.

Can I reuse disposable cameras?

While labeled as single-use and disposable, you can disassemble and reuse these cameras. Just unscrew the housing, then replace the film and battery.

How many pictures can you take on a disposable camera?

The standard is 27 shots or exposures on a single roll of film per camera.

How much does it cost to develop photos for disposable cameras?

The best way to get the film developed so you can see how it turned out is to head to your local camera store. The price will vary depending on the type of film and the number of photos. But, the process is easy. And on average, it’ll be $10-20. So it doesn’t cost much.

Now, if you’re feeling adventurous, you can develop the film yourself. And you can find detailed guides online showing the appropriate steps.

How to Choose the Best Disposable Camera?

When choosing a disposable camera, you’ll want to consider several characteristics beforehand. Below is a summary of the factors that may be important.

A built-in flash is essential if you want a take-anywhere camera. It allows you to add light to an otherwise dark scene. And it makes it possible to capture images in dark environments or indoors. But, know, not all cameras include built-in flashes.

Another factor to consider here is the flash range, which determines how far it reaches a subject. Historically, the flash range varies from 1-3m, and going outside of this range results in unusable images.

The film’s speed determines the camera’s ISO or sensitivity to light. The lower the ISO, the slower the film, which results in darker images. In contrast, higher ISO values represent faster film speeds and brighter images. The trade-off here is that fast film increases image noise.

Most disposable cameras have ISO values of 400 or 800, suitable for both daylight and sunsets. But, if you plan on taking pictures outdoors during the day, look for cameras with lower ISOs. And, if you plan to take photos in the dark, the higher ISOs of 800 or 1,600 are best.

If you’re interested in taking your disposable camera anywhere remotely close to water, then a waterproof camera is a wise choice. These cameras offer water-sealed constructions, allowing them to be submerged underwater. But, they’re also a great companion for snowy or rainy days without fearing damages.

Most disposable cameras have an average aperture of f/11 or f/10. But the smaller the number, the more light the camera sees as such, the better the image quality in low light.

Selecting the type of film to capture is essential, be it full color, black and white, or sepia. And you’ll want to ensure you know the film type the camera is using beforehand as not every camera uses the same type.

Most disposable cameras offer either 27 or 39 shots per camera. Getting more shots is slightly more expensive, however. So if you plan on taking a lot of photos, getting a bundle pack with multiple cameras is the most affordable route.