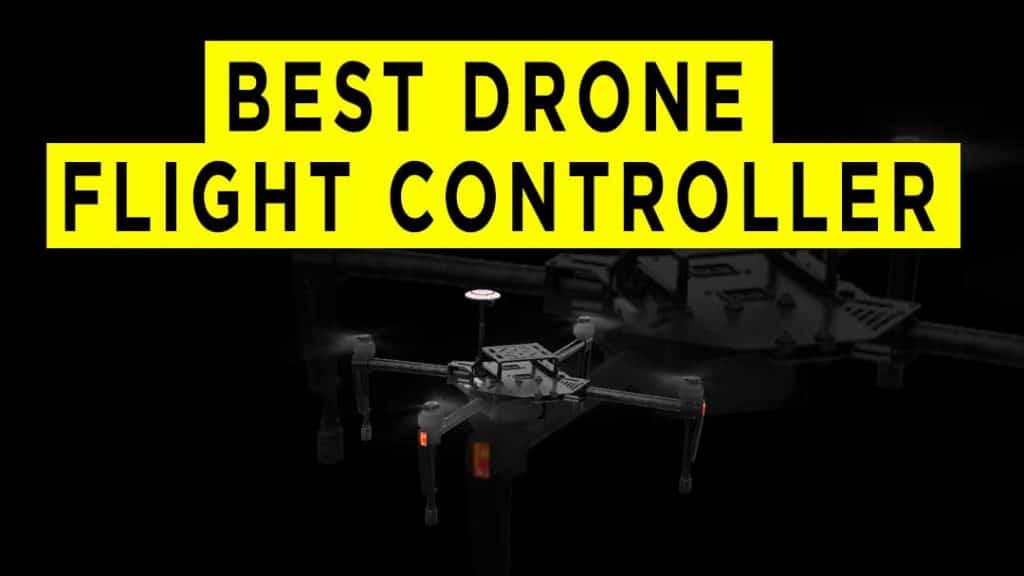 Building a quadcopter from scratch requires many components. But, the most important of all is the flight controller. In many respects, it’s the nervous system of these devices. And it’s your main point of contact while in the air that conveys the information received from the transmitter into actionable outputs to the drone. This circuit board alone houses all of a drone’s main components. And it’s what ultimately decides aerial performance and maneuverability. So choosing a suitable controller here for your aircraft will significantly affect the outcome.

But, going into the DIY realm isn’t without its challenges. And picking the right controller to meet your intended flying style is a moderately daunting task requiring some research and technical knowledge. Even so, building your drone from scratch will be immensely rewarding and worth the investment. So to help you in your quest to find the right controller for your next build, we’ve compiled a list of the best options on the present market. We’ve also compiled a brief guide below on the most important aspects to consider and help clarify some of the technical nuances with these devices.

The Naze32, originally by Abusemark, is an excellent option for those building a small or mid-sized aircraft. This controller includes a 3-axis gyro and supports up to 6 motors. But, it can also act as a standalone camera stabilizer. It also uses a 32-bit processor, though it does use the older F3 EVO architecture. Thankfully, it’s an entirely open-source platform using Multiwii configuration and supports the popular CleanFlight system. And only 5g, it packs some punch for such a small controller. Other features include low battery voltage monitoring and a built-in inverter.

Overall, the Naze32 is an excellent starter option for seasoned pilots looking to embark into DIY territory.

The Race 32 Micro from Hobbyking is designed with racing in mind. And at a weight of 5g as well, it’s ultra-lightweight and perfect for shaving off unnecessary airborne weight. And this makes it ideal for racing, where every gram is critical in winning. But, unlike the Naze32, it comes with some perks. In this case, it also uses a stackable design and a full complement of ports, so you can integrate an OSD if desired. But, it too uses a slightly older STM32 F3 processor rather than the later F4 architecture.

But, it’s fully compatible with Cleanflight. And it does offer all of the necessary boards of controllers twice its size. Other features include Blackbox logging, low battery voltage monitoring, programmable LEDs, and a built-in inverter.

The Pixhawk PX4 is a collaborative release with Holybro and Auterion. And it brings a 32-bit ARM architecture that now removes the 8-bit APM flight controller altogether. As such, it now becomes far more powerful and a monumental leap forward. The Pixhawk is an open-source platform supporting ArduPilot and PX4, making a hit amongst the DIY crowd. So if you’re looking to tinker, you can use this board as a starting point to configure it as you wish.

But, by default, the kit comes with a low-noise IMU for stabilization and an isolated vibration design reducing that particular headache. Other features include external multi-colored LEDs, redundant power, and a MicroSD slot to record flight data.

Overall, the PixHawk PX4 is an excellent option for seasoned pilots wanting a more modular system.

Holybro’s Kakute AIO, now in its second generation, brings an F4 processor with a soft-mounted gyroscopic sensor. Holybro’s mounted the IMU chip on vibration-isolating foam. As such, the Kakute F4 gives you more freedom to use it with different ESC’s. And this alone removes the headache involved with mounting the controller properly to avoid aerial vibrations.

This model also comes with DJI FPV VTx support from the get-go. So you can use that system if you plan on flying in FPV, which is excellent as digital transmission offers some notable advantages over analog. Other features include Blackbox logging, Betaflight OSD support, altitude hold, a dedicated bootloader, and low battery voltage monitoring.

Overall, Holybro’s Kakute F4 is a solid option for seasoned pilots wanting the benefits of a soft-mounted FC.

The Naza-M V2 by DJI is quite a popular choice and brings new features to the range. Namely, it now includes GPS, providing better altitude hold functionality and refined in-air stability. DJI also updated the 2-axis stabilization algorithm, further improving the results. And there’s a new take-off mode, too.

Yet, the Naza-M continues to provide excellent safety and makes landing possible should a motor fail during flight. But, unlike rivals, this is a closed-source platform. So, if you want to perform advanced modifications, you won’t have access to the necessary code. Even so, this controller is quite comprehensive, fairly advanced, and entirely plug-and-play. So no hassling with configuring the device manually. Other features include automatic return home, orientation control, motor failure protection, low battery voltage monitoring, and take-off assistance.

Overall, the Naza-M V2 is an excellent controller for larger hex or octocopter drones. But it’s also a great choice to create a powerful aerial photography drone. Or if you want something simple, plug-and-play, and dependable.

What is a flight controller?

Before going into depth on the factors to consider with flight controllers, abbreviated FC, let’s first cover their use. The FC is the central circuit board of the drone. And it houses many sensors. Some of these include the gyroscope, accelerometer, and a barometer. But, there are others. Even so, the FC’s main function is to receive and process the input signals from the drone’s receiver. Once it receives them, it executes the appropriate commands based on the input.

In many ways, its functionality is identical to a computer’s CPU and processor. And it’s analogous to the human brain and central nervous system. Both direct the functions of another internal system to direct a final action. In this case, the FC mostly directs the quad’s movement by sending inputs to manipulate the motors. It also senses wind and air pressure to help combat in-air forces. And without it, you’d have no way of calculating the differential speed of the motors. Thus, you’d have no way to control the quad’s movement. But, it also directs other functions of the drone. Namely, it provides information about altitude, orientation, flight speed, and critical information like battery level.

Now that you have a better understanding of the FC’s role let’s discuss some of the sensors available on these products. You can find FC’s with a wide range of included sensors soldered onto their circuits. So it’s important to know which functions are important to your flying experience beforehand. Use the below list as a starting point, as there are quite a few components available on these devices on the market.

Accelerometer – most FC’s included a built-in accelerometer, which measures the linear acceleration of the drone.

Gyroscope – Most FC’s also have a built-in gyroscope that measures the rate of angular change.

Magnetometer –  most FC’s have a magnetometer to align the quad to the polarity of the earth’s magnetic field.

IMU – you can find some FC’s that use an IMU or inertial measurement unit. IMU’s combine an accelerometer, gyroscope, and often a magnetometer into a single unit. And this gives the FC real-time information to determine the quad’s angular speed and current acceleration. Together, this provides more accurate control, stability, and responsiveness.

Barometer – Most FC’s have a barometer, which measures pressure to help determine the drone’s altitude and height above sea level. And this feature allows it to provide altitude hold functionality to maintain stability at a set altitude.

Distance Sensor – some FC’s include a more modern distance sensor, which improves the accuracy of the barometer’s reading.

OSD – the on-screen display overlays important flight information like battery, GPS, altitude, airspeed, and more. And you can find some FC’s with this functionality overlaid on the video feed.

The F1 processor was the first processor to hit the drone market. But, the markets have seen enormous innovations over the last seven years, and these processors can’t keep up with most modern ESC’s. As such, most manufacturers in this space don’t support them these days, and they’ve been discontinued. Then there’s the F3 processor, which offers a comparable speed as an F1 processor but provides more flash memory.

You can still find this processor around in older generation FC’s. But, starting in 2017, most manufacturers moved to the F4 processor, which is both faster and offers more flash memory. And the F4 is the standard these days. However, if you want to future-proof your build, consider looking for an F7 processor. This format delivers the highest speed and greatest power around. And you can find most high-end FC’s offering this processing format.

The physical size of the FC does vary. And it’s an important factor to consider depending on the size of your quadcopter. You can find models ranging from 20x20mm to 36x36mm. 36x36mm is the standard, and most quads end up using this size. But, if you’re looking to build a micro drone, then a smaller 20x20mm FC is the only option as a larger model here wouldn’t fit on the aircraft frame.

The FC you choose must be compatible with the drone’s receiver. If not, there will be a miscommunication, and the drone will likely not take off. Thankfully, most FC’s are compatible with a wide range of popular receiver units on the market. So, incompatibility shouldn’t be a huge problem. But, if you do opt for unknown brands, be sure to check the compatibility on their website beforehand, as this does vary from product to product.

Yes, the drone’s flight controller is interchangeable. But, the compatibility will vary based on the circuitry of your remaining build, as not all support similar ESCs, sensors, and motors.

Can a drone fly without a flight controller?

What does a flight controller do in a drone?

The flight controller is the brain of the aircraft. And it’s a circuit board that houses all of the necessary sensors to detect movement and execute user commands based on the data it receives from the transmitter.

What does an electronic speed controller do on a drone?

Can you run two brushless motors off an ESC?

No. The circuitry of an ESC doesn’t permit sensing voltage in parallel to support this functionality. It can only detect a single voltage from the motor to drive movement. So adding a second motor in the circuit wouldn’t work.

Can you run a brushless motor without an ESC?

No. The ESC is a required component in the signal flow needed to control a brushless motor.