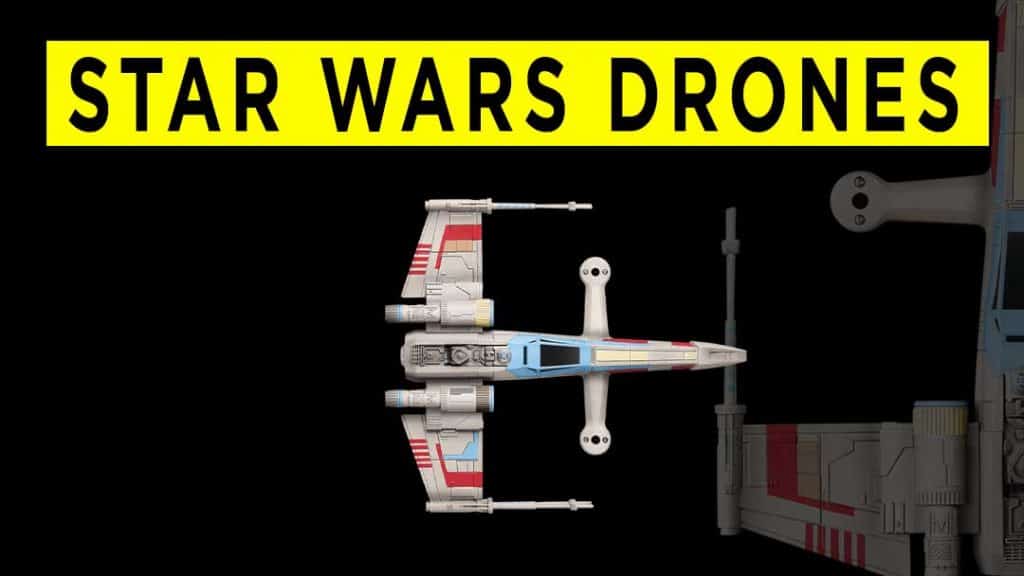 Without question, the Star Wars franchise has changed both the world of cinema and toys since its debut. And it’s a cultural phenomenon. Lightsabers, Han Solo, Darth Vader, and the Death Star are just some of many popular toy replications. But, it seems four decades later, Star Wars is moving into new territories. In this case, the drone market. And in 2016, dedicated Star Wars drones hit the market.

So now, pilots have access to legendary ships like the Millennium Falcon, TIE Fighter, and X-Wing at their disposal. And longtime fans can finally complete their collections or join the thrills of battling against a half dozen enemies in an aerial dog fight. Either way, they’re here and accessible. So in today’s post, we’ll cover the best models available. And we’ve also included a detailed guide below on the factors to consider when looking for your very own Star Wars drone.

The Air Hogs X-Wing Starfighter lets you join the Rebel Alliance firsthand and pilot a classic.

It uses an impact-resistance foam body designed to prevent damages during sudden landings. Even so, it uses ducted rotors embedded into the wings, giving it a stable but powerful flying experience. Granted, it’s a flying experience that requires some practice. But, otherwise, it also uses a 2.4 GHz communication module, supporting a maximum range of 250 ft (76 m). And, overall, Air Hogs X-Wing Starfighter is an excellent option for open-field flights without much wind. It’s a tricky drone to fly initially, but a fun one with a huge payoff nonetheless.

The Millennium Falcon by Air Hogs lets you pilot Han Solo’s legendary ship, and arguably, the most iconic ship in the entire universe.

This drone offers an enormous level of detail. Even so, it’s designed from impact-resistant foam, making it unlikely to suffer damages during most crashes. And Air Hog’s has taken an extra measure to add foam ducts around the rotors, giving them extra protection against damage. It also houses LED lights, and the controller plays authentic sounds, making the experience more immersive. And there’s even a Hyperspace Booster mode on the controller for added flair. Otherwise, the drone uses a 2.4 GHz communication module, letting it support a working distance of 200 ft (60 m).

Overall, The Air Hogs Millennium Falcon lets you fly the legend of the Galactic Civil War. And now you can do so in the comfort of your home.

This drone-based battle set by Air Hogs lets you lead the infamous Rebel attack on the Death Star. And it’s a package ready to provide massive fun.

Get behind the X-wing and embark into battle to defeat the Empire. The first pilot to get three direct hits wins. But, the Death Star has a fully autonomous mode, where it pilots itself and shoots back. So it’s not the easiest opponent or a washover. Each aircraft provides responsive lights and genuine sounds that make the experience more immersive. But the X-wing offers gyroscopic stabilization for smooth and stable flight as well as a 2.4 GHz communication module with a supported range of 200 ft (60 m).

Overall, Air Hogs X-wing vs. Death Star kit brings massive fun. And it puts you center stage in the most epic battle in the universe.

The T-65 X-Wing by Propel Toys shows their dedication to the series and remakes the go-to of the Rebel Alliance. It’s available in both a standard and Collector’s Edition, which plays the Imperial Theme music upon opening.

It’s a hand-painted replica that brings the company’s existing expertise into a new lineage. Even so, it’s more than just a replica. This quad can reach a blazing fast speed of 35 MPH (56 KPH) in three seconds using reverse propulsion. And you can perform stunts and tricks, like barrel rolls with a single button press. Thankfully, they’ve included three adjustable speed settings so that you can cater its performance to your skill level.

They’ve also included a training mode, letting you learn the basics without fears of crashing. And it’s approachable for beginners. But, interestingly, it features awareness technology letting you play with 12 other players in a real-time battle using the companion app. Other features include altitude hold, one-key take-off, and Propel includes an extra battery, and 12 extra propellers.

Overall, Propel’s X-Wing makes you feel like the Red Leader himself. And it’s an excellent remaking of this iconic starfighter.

The Tie Fighter by Propel Toys is a detailed and direct replica of the infamous Darth Vader ship. And it too is available in both a standard and Collector’s Edition, which plays the iconic Imperial March song during unboxing.

It features three selectable flight modes, suiting both beginners and seasoned pilots. In the expert setting, you’ll unlock the drone’s agility and impressive 35 MPH (56 KPH) top speed. But, to not overwhelm beginners, the first mode tames its flight. Propel also includes a training mode, so beginners can learn piloting skills. And during the flight, it lights up, and the controller plays original music. There’s also an option to perform tricks or using the companion app, you can embark on special missions and enjoy an interactive game with 12 players. Other features include auto-landing, one-key take-off, altitude hold, and an extra battery.

Overall, long-time fans will love the attention to detail and finishing touches offered here. And Propel’s Tie Fighter is an excellent release that remakes an icon.

There are two types of devices in this space. The first is a faithful replica of a vessel that comes with an included controller. But, the other option is a battle set, giving you two quads to recreate a historical battle from the movie. Both options are great. However, if you want to have other pilots join in the fun and make the experience more competitive, a battle set is best. There you can shoot each other down and compete for first place. Otherwise, getting a single drone to fly recreationally is best.

If any manufacturer is to acquire the license to make these products, they must replicate them faithfully. But, some sellers do go into more detail than others. And you can find some devices that are hand-painted to the finest magnification. So if you want the most accurate replica, looking at renderings of each product beforehand is wise.

Another aspect is the durability and likelihood of the device to survive a crash. Most of these devices are aimed at kids and new pilots. So it’s likely they’ll crash at some point when learning the basics. And if that happens, at a minimum, the paint will chip. But, the last thing you want is the propellers and motors getting damaged, as some are not replaceable. And if that happens, the entire drone will become useless. As such, it’s important to investigate their durability beforehand, especially if you want to fly outdoors.

All of these devices will include a wireless controller to direct the drone’s movements. But, their designs and general functionality do vary. Not all models provide controllers with added features like one-key return home, stunts, or emergency landing. And not all models in this space offer controllers that play movie-accurate sounds and effects to deliver more immersion. So it’s important to look into this aspect beforehand for the necessary user-friendly controls and ease of use required.

You can find some models that offer an included flight simulator. And it’s an excellent option for new pilots to learn the basics without any real-life challenges or potential damages involved.

If you opt for a battle drone set, you can take part in their battle modes. Here you can play a multiplayer aerial dog fight directly inspired by the movies. And you can fight against 12 players, where each has three lives, and you earn points by hitting opponents with lasers. It’s quite fun, and it’s a primary reason for opting for this style of product.

You can find many of these devices offering aerial stunts and fun maneuvers. But, not every product offers these capabilities. So if you want to perform stunts like barrel rolls or 3D flips, be on the lookout for this functionality.

The battery life on these products isn’t amazing. And most only offer an average flight lasting between 5-8 minutes on a full charge. So it’s important the device provides convenient recharging, ideally through USB. Sadly, though, most don’t offer interchangeable batteries. Thus the recharging time will be the key determiner in how often you can fly.

If you want to fly outdoors, then speed will be an important consideration, as you’ll want enough power to fight a moderate wind. While all of these devices have dedicated motors for propulsion, their designs vary. And how the rotors are configured will determine the top speed available. Even so, you can find models offering a top speed of 35 MPH with enough power to fly outdoors in most situations.