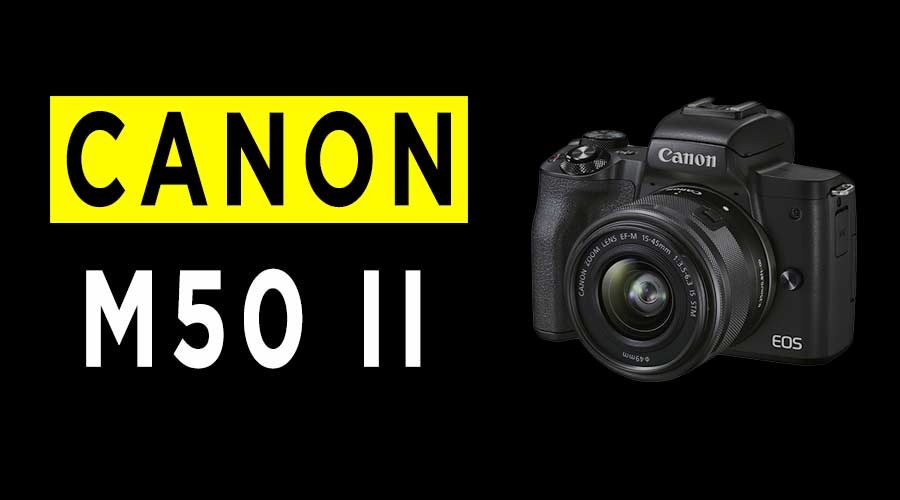 Released in the fall of 2020, Canon’s EOS M50 Mark II is their latest entry-level mirrorless camera. And it’s a camera they’ve specifically catered towards content creators or hybrid shooters. But, even so, it’s their most versatile and well-rounded option in the EOS M lineup. Its predecessor, the EOS M50, is arguably their most popular and best selling entry-level camera. So, it would make sense to see them eventually want to refresh the line, double down, and continue its success. But, on paper, the Mark II looks to be quite an insignificant refresh over its predecessor.

And Canon’s played it exceptionally safe with this particular release. But, given the amount of competition in the entry-level mirrorless segment, will this new release add any value? And are the changes even enough to justify the added price over the “older” model? It competes with Fujifilm’s X-T30, Sony’s a6100, Nikon Z50, Panasonic’s G100, and Olympus’ E-M10 Mark IV. And many of these cameras offer better features. Has Canon really done enough this year? Or have they just given rivals yet another opportunity to steal their thunder? Let’s find out.

What are some of the goods, bads, and uglies of the Canon EOS M50 Mark II?

It inherits the identical 24.1-megapixel CMOS sensor and DIGIC 8 processor from its predecessor. This particular combination, while unchanged, remains a known strength for Canon. And the image quality is still excellent, particularly for this segment. The 14-bit C-RAW images are sharp, with plenty of contrast and pleasing colors.

It offers the same continuous shooting speeds as its predecessor. In this case, it still shoots up to 10 FPS without AF or 7.4 FPS with AF and tracking. However, the buffer depth is marginally improved. And now, the camera can shoot 10 RAW + JPEG images before slow, rather than 7-8.

While unchanged here, these capabilities are mostly standard for this segment. It would be nice to see Canon push the bounds here, but sadly that will have to wait. Like the M50, the footage is reasonably sharp in 4K, with Canon’s pleasing color science. But, it has a few caveats, and we’ll discuss these in the con’s section.

The camera maintains the industry-standard 29 minute and 59-second recording limit.

It now supports Vertical Video, which tags the metadata for proper vertical playback on smartphones.

It now offers the Movie Self Timer Function, with Touch Record Control. This allows you to set a countdown timer between 2-10 seconds, then tap the screen to start recording. It’s a helpful option to avoid some post-processing if you need time to get ready before filming.

It obtains the 4K Frame Grab feature, which allows you to pull still images for a 4K movie.

It now offers a clean HDMI output for use with external recorders or monitors. And this now makes the camera a reliable option for live-streaming.

Low light performance is identical to the predecessor but competitive in this segment. It features a native ISO range from ISO 100 to 25,600. And the camera can deliver usable photos and videos up to ISO 3,200.

It obtains the same 143-point phase-detect AF system with Dual Pixel CMOS AF as its predecessor. And this system offers both Face and Eye-detection along with AF support down to -4 EV. However, Canon’s made refinements to the algorithms, increasing its overall speed and responsiveness.

Though, it’s not a substantial earth-shattering difference. And they’ve now enabled Eye-detection during video recording, a feature missing on the original model. Nevertheless, the camera’s autofocus is excellent. And it tenaciously locks onto subjects and recognizes faces further than before.

Additionally, you can now customize the AF settings via the menus. And this allows you to customize the AF transition speed to tailor the system for a faster response or a more cinematic effect. And this combines well to create smooth and natural focus transitions when using the touchscreen.

It also offers focus magnification and peaking, if you prefer manually focusing.

It obtains its predecessor 3.0-inch vari-angle touchscreen LCD with a resolution of 1.04M dots and Clear View II coating. While unchanged, the screen remains par for the course in the entry-level segment. And a fully articulating screen is also ideal for the flexibility it offers when composing at awkward angles. The display also supports the same touch functionality. In this case, it supports touch focus, touch tracking, touch drag, and menu navigation.

The camera also obtains the same 2.36M dot OLED electronic viewfinder. While unchanged here, this display was already good. And it’s sharp, bright, and the colors are accurate.

It uses standard Canon menus, which is perfect for beginners. The camera also offers the GUIDE Mode, which simplifies the interface, making it even more straightforward and intuitive. Overall, this camera is easy to use, and users won’t find it difficult to master.

It also obtains the My Menu so that you can customize a list of your favorite menu settings.

The camera offers 5 customizable buttons, which you can tailor to meet your shooting style.

Physically, this camera is identical to its predecessor in size, dimensions, and weight. Canon hasn’t opted for changes here. But, even so, the camera remains incredibly small and compact. And weighing only 350g body alone, it’s easy to travel with and store in large pants pockets. The size and form factor was already a strength of this particular camera, so it’s good to see it continue.

It has a built-in flash.

It has a microphone input.

It has built-in Wi-Fi, Bluetooth, and NFC connectivity. And you can remotely pair the camera to transfer images via Canon’s Camera Connect app. The camera can also act as an external webcam using Canon’s EOS Webcam Utility. However, new for this particular release is live streaming. And now, using the camera’s Wi-Fi, you can stream directly to YouTube.

Note: your channel must have at least 1,000 subscribers to stream to YouTube.

It features Combined Image Stabilization (IS), which uses the camera’s digital IS alongside optically stabilized lenses to create a 5-axis system. And by doing so, the camera offers better performance and shake reduction. But, as with all digital-based systems, this added performance comes at the cost of a crop when enabled.

It features the Silent Mode, which uses the electronic shutter to silence all camera sounds while shooting.

It obtains Canon’s Creative Assist mode, which is their in-camera image processing engine. You can adjust dynamic range, HSL, white balance, add filters, and more in this mode. And it’s ideal if you want to process images in the camera.

Like its predecessor, shooting in 4K has several severe limitations and makes it almost unusable. Firstly, it still has a severe crop, which is now 1.5x instead of 1.6x. This effectively reduces the camera’s 24-megapixel sensor into 8, significantly decreasing resolution and alters the field of view.

And combined, this equates to a 2.4x total crop from 1080p FHD. Secondly, the camera still suffers from rolling shutter, particularly in 4K. This distortion is far less in 1080p, but take caution when panning. Lastly, the quality of the 1080p and 720p footage remains below average. The videos are soft, noisy, and suffer from aliasing just like its predecessor. And overall, it’s best to avoid these resolutions.

Frustratingly, Canon hasn’t removed the autofocusing limitation of the EOS M50. And this camera still loses DPAF when shooting in 4K, defaulting to a contrast-detect AF system instead. Without DPAF, the autofocus in 4K is poor, and the camera hunts quite a bit before acquiring focus.

It uses the same LP-E12 battery. But like the original model, battery life isn’t great. Canon rates the camera at 320 shots per charge, which is below average. So, consider picking up extra batteries.

Due to size, the camera offers only a single adjustment wheel. Manual shooters will have to first map a custom button to control ISO. Then switch the wheel’s behavior for proper manual shooting. And this process is slightly involved, slowing workflow.

Like most compact cameras, both the battery and SD card live in the same compartment underneath the camera. And this makes changing either of them tedious when using a tripod or gimbal.

It lacks a headphone output.

It lacks a USB-C port. Instead, it uses the standard micro-USB connection, which offers noticeably slower file transfer speeds than rivals.

Canon’s EF-M mount is still lacking in lenses, and the system is still relatively undeveloped.

The original M50 was already an excellent camera for beginners and Canon’s most popular camera for this audience. Given that this camera maintains the vast majority of its features and affordable price tag,

it’s also equally well suited. The only minor consideration is the EF-M lineup of lenses remains limited, and Canon continues to neglect to build up this collection. And like it’s predecessor, the 4K on this camera feels purposefully limited, so it’s not the right choice if you desire a versatile video camera. Nevertheless, it’s a strong option that offers similar abilities as their higher-end 80D DSLR. And it’s capable nonetheless.

New users looking at this lineup, however, should get this camera instead. The updates the autofocusing and eye AF support in video will make things easier for you. And considering the marginal price difference between this and the original model, it’s the better option.

Content creators looking for an affordable streaming camera should consider this camera, particularly if you use external recorders. However, this is otherwise not a good camera for video. Combining the crop in 4K, rolling shutter, and aliasing in 1080p, the camera’s quite impractical in all resolutions.

And at this price point, better cameras exist. Consider Panasonic’s G100, Fujifilm’s X-T200, or Sony’s a6100 instead.

In the end, Canon’s EOS M50 Mark II carries the vast majority of the capabilities forward from its predecessor. And it’s clear Canon’s played it safe this year in the entry-level segment.

While it may come as a disappointment to many, this particular lineup is quite a popular option for beginners. And despite the minimal changes, it remains a solid option for newcomers to the system.

Granted, this camera faces some fierce competition at this price range. And given the continued disappointments in video capabilities, it’s not the best camera for aspiring videographers. Better options exist at this price. But suppose you want an intuitive user interface, vertical video, excellent autofocusing, and 1080p live streaming. Then, in that case, this is the camera to get.

Canon’s EOS M50 Mark II changes little over the original model. It’s clear Canon’s playing it safe this year. But it’s also disappointing to see. Even so, the Mark II remains a solid entry-level camera, despite its massive flaws in video capabilities.