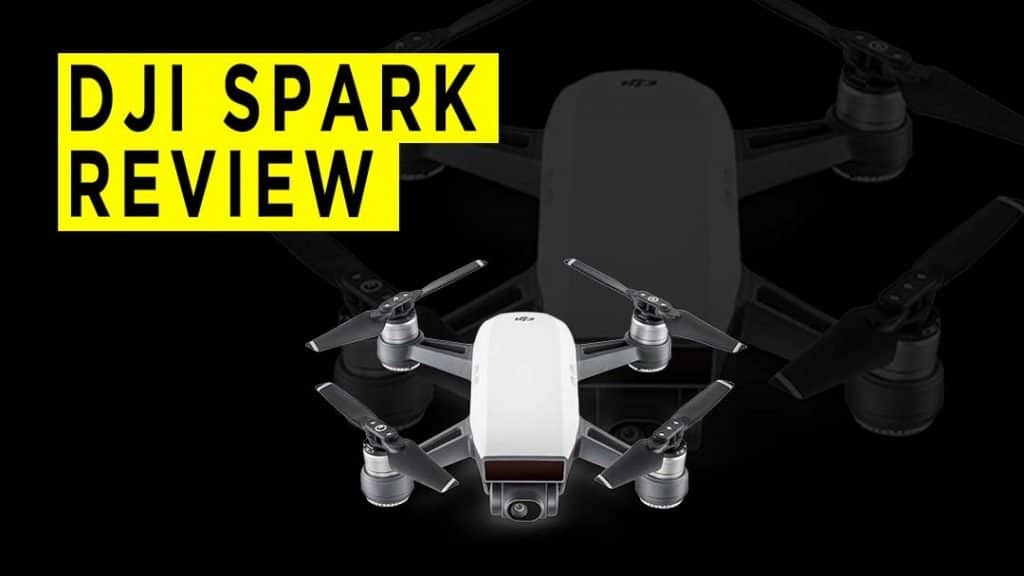 Initially released in the spring of 2017, the DJI Spark creates a new lineup in DJI’s range and officially marks the first entry-level product in the current lineup. DJI aims this ultra-portable smart drone at novices and beginners, hoping to sway them into the world of drone photography. Thus, it focuses mostly on convenience and ease of use, rather than performance. However, DJI has quite a reputation for packing tons of features, and this release seems to follow suit. On paper, it has the potential to bring aerial photography to an entirely new user demographic.

While, simultaneously, providing class-leading features, previously foreign to the entry-level segment. DJI aims this drone as a competitor to FIMI’s A3, Hubsan’s Zino, Parrot’s Bebop, and Holy Stone’s HS720. In today’s post, we address its strengths and weaknesses and answer whether it’s still relevant today. 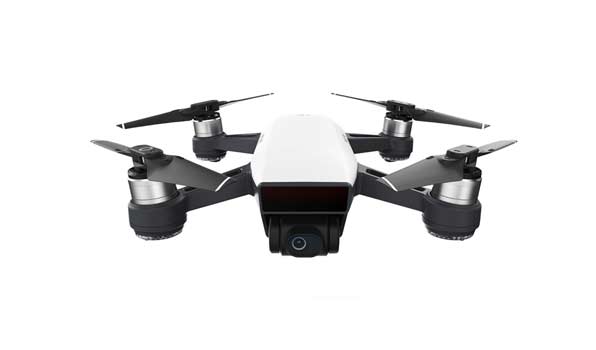 What are some of the goods, bads, and uglies of the DJI Spark?

It uses a fixed-wing design. And while this drone isn’t collapsible, it remains incredibly small and lightweight, coming in at only 300 g. In form, it’s roughly half the size of the Mavic. However, it isn’t quite light enough to avoid FAA registration. So, you will need to register the drone before a flight. Only the DJI Mini holds that unique ability.

Nevertheless, from a design standpoint, the drone is attractive and much friendly than its larger high-end counterparts. Its small size also makes it far less intimidating during flight, particularly when flying in public spaces such as a park or beach. Flying a larger drone like the Mavic tends to make bystanders a bit uncomfortable, as it’s quite a professional, serious looking drone. But, overall, build quality and design are both excellent. The drone feels sturdy and robust.`

DJI also provides a full suite of replacement parts on their site. So if damages occur, you can easily get replacements, if needed.

DJI’s equipped the drone with a 25mm f/2.8 lens and a 1/2.3-inch CMOS sensor. This combination allows the drone to capture 1080p Full HD videos at 30 fps and 12MP stills. The camera’s mounted on a 2-axis mechanical gimbal, which compensates for movement in the pitch and roll axis. And it offers digital stabilization over the yaw axis. It’s quite rare to see a gimbal included on a drone of this size and form factor. Even more so, considering most rivals at this price point lack any level of stabilization.

Overall, the image is good and on par with rivals in this class. The footage is reasonably sharp, well-exposed, and produces accurate colors. It’s still images are equally as good. And for the target audience, the quality, and capabilities offered here are perfect.

It also has several picture shooting modes, including single shot, burst, interval, panorama, and ShallowFocus. ShallowFocus, in particular, creates in-camera focus stacks, where you can adjust the focus in post-processing. A nice touch.

Battery life is excellent, considering its size. DJI rates the drone to deliver 16 minutes of flight on a single charge.

DJI has eliminated the need for a dedicated controller to make the drone as easy to fly as possible. Instead, you’ll control this drone from your smartphone, significantly increasing the convenience. It also simplifies the process of getting the drone into the air, following unboxing. However, they do provide a dedicated controller.

And it’s available for purchase as a stand-alone addition if you’d like it. Thankfully, the controller offers several notable additions and serious value, making it a worthy purchase. Firstly, it unlocks the drones Sport Mode, increasing its performance and allows the drone to reach a top speed of 31 MPH. Secondly, it increases the drones maximum range to 2000 m. With the app alone, the range offered maxes at about 100 m, which is about standard for the range of Wi-Fi alone. Overall, the controller is an excellent add-on, and a welcomed bonus.

The controller itself uses a similar design and build as the one featured on the Mavic series drones. And it follows the same basic model, with a few minor differences. Nevertheless, it’s well constructed and provides excellent precision during flight.

You fly the drone using the DJI Go 4 app, which is excellent. The app’s interface is well-designed, straightforward, and intuitive to use. The left side displays various flight modes, including take-off, return home, and intelligent modes. And the right side shows shooting modes. The app offers plenty of adjustments and customization and mostly matches their higher-end drones. You can customize flight parameters, the camera settings, joysticks, among others. Overall, the flight app is excellent.

Taking off and landing the drone are both easy. Enable gesture control via the app. Hold the drone towards your face, double click the power button. The drone scans you the scene, recognizes your face, then slowly takes off from your hand. To land, place your palm underneath the drone, and it’ll gently land on your hand. Brilliant.

DJI’s design this drone from the ground up to make it easy to fly. The drone has both GPS and an internal barometer, which makes it incredibly stable during flight. It also includes ample autonomous assistance during a fight, partly due to its precision hovering technology and obstacle avoidance sensors.

The result is a drone that provides a fly experience that surely meets the expectations of any DJI product. The flight performance is responsive, consistent, and intuitive right out of the box. It requires little, if any, skills for flight. And even novices will quickly master flying this drone. There’s also no setup, installation, or tuning—it operates right out of the box. So you’ll immediately begin capturing cinematic footage or start enjoying the experience of flying a drone, right out of the box.

This drone inherits the full suite of standard Intelligent Flight modes found on DJI’s range. However, it also adds a few notable additions to the roster. We will cover the full set of modes offered below.

It also offers Gesture Control, a nice addition that allows users to control its flight without the need for the app or controller. This feature is the most marketed aspect of this drone, and it’s quite an exciting addition. This flight mode offers several options for autonomous flight, which includes Palm Take-Off, Palm Landing, Portrait, Wave, and Palm Control. With these, the drone takes off directly from your hands and is controlled by your palm.

You can also have it take self-portraits, or wave, to engage Follow Me subject tracking. The drone recognizes pilots even when wearing sunglasses or hats. And, overall, the implementation of Gesture Control is brilliant and well-executed.

Note: Gesture Control has a dedicated submenu in the app. You can find all of the settings in the DJI app. And it works best on overcast days or under shade, as harsh daylight reduces the accuracy of the cameras’ 3D vision system.

Another highly advertised feature is the drone’s front-face Obstacle Avoidance system. These 3D sensors allow the drone to see what’s in front of it, and warn pilots of incoming danger. When the drone recognizes an obstacle in its flight path, it signals an audible warning in the app, preventing a crash. And as a bonus, it also provides downward-facing sensors that help it land safely.

The drone lacks both 4K and slow-motion video in 1080p, be it 60 fps or 120 fps. However, considering the target audience, this is understandable.

Like most Wi-Fi drones in this class, the range isn’t the greatest. Using your phone alone only allows for a maximum range of 100 m, which is average for this class. Thus, if you want to fly the drone at greater distances, you’ll have to purchase the remote controller, which costs extra.

Is this a good beginner drone?

It’s an excellent drone for beginners. For the price, you get DJI’s higher-end Mavic, in a smaller and friendly form factor. This drone outpaces rivals in virtually every regard and offers exceptional value for first-time fliers.

What are the best lenses & bundles for the DJI Spark?

Is this a good drone for you?

In the end, the Spark inherits much of the class-leading technologies typically reserved for DJI’s higher-end lineup. But, it does so at a price point that won’t scare off new fliers. Overall, it’s an excellent starter drone, and, arguably, the best in its class for this purpose. Sure, it doesn’t offer advanced features such as a large 1-inch sensor, 4K, or slow-motion video.

But, if you’re willing to look past these minor gripes, it’s a compelling option and provides exceptional value for money. And you’ll also be pleased to know that it’ll hold its value following purchase, like most of DJI’s products. With this drone, DJI has designed a drone for the everyday user looking to capture and cherish moments. Nothing else in this price range offers both full obstacle avoidance, gesture control, and Active Track. And for this price, there’s nothing like it. Unless you’re a power user or serious enthusiast, this is a perfect choice and excellent traveling companion.

DJI’s Spark offers exceptional value considering its feature set. DJI has thoroughly equipped the drone with many of the flagship features and advanced technologies typically reserved for higher-end drones. And that decision has created the best all-round starter drone for enthusiasts and new fliers in the process.