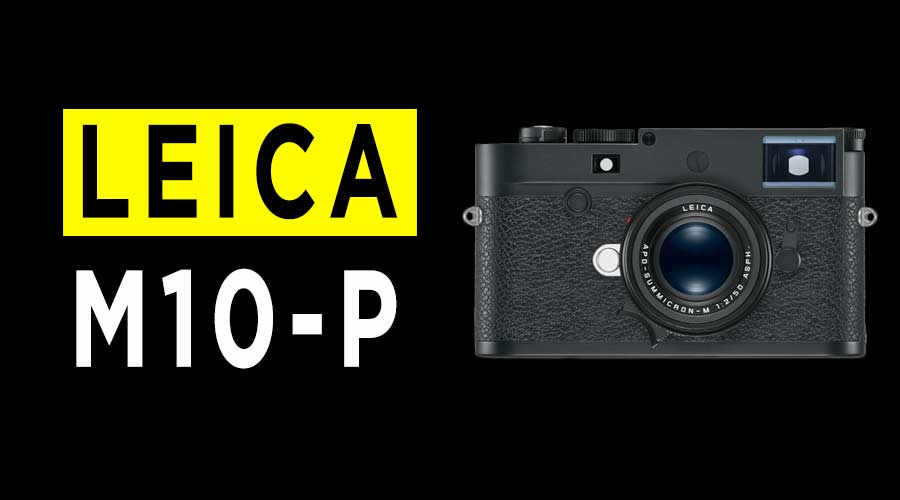 Released in the fall of 2018, Leica’s M10-P (Typ 3656) comes to market as the updated variant on the original M10, released one year prior. The M10-P is a full-frame digital rangefinder that blends digital imaging with an updated yet paired down appearance matching the analog M cameras of this series.

On paper, it brings the quietest shutter of all its siblings, a touchscreen LCD, and a new stealthy design. And it comes to take the traditional, understated design in the M-series to new heights. But otherwise, it appears to embody all of the advancements previously made in the widely popular M10. But, considering this lineup is arguably the greatest film camera of all time, can it continue such a legacy. And are these seemingly minor refinements worth the extra money over the already excellent M10? Let’s find out.

What are some of the goods, bads, and uglies of the Leica M10-P?

It obtains the same 24MP full-frame CMOS sensor and the Maestro II image processor from the base M10. With that, the image quality, color rendering, and dynamic range are identical. While unchanged here, the image quality remains excellent nonetheless. And the camera’s DNG (RAW) images offer plenty of detail and great latitude for post-processing. Plus, they deliver the pleasing yet, realistic rendering Leica’s known for.

However, unlike the base model, Leica redesigned the shutter mechanism with this refresh, and it’s a small but notable distinction between the cameras. With this redesign, the shutter mechanisms provide better dampening. So much so,  it now stands as the quietest of any M camera thus far, be it analog or digital. This is quite a feat on Leica’s part, as its analog predecessors were already reasonably quiet themselves. It’s a minor detail. But, one budding street photographer will appreciate it, as it adds the camera’s unobtrusive nature. And now, the shutter sound is barely audible and a mere whisper. As such, this becomes a key selling point over the base model for photographers wanting utmost discretion while shooting.

The Maestro II processor offers a 2 GB buffer, which lets the camera provide 40 consecutive RAW frames at 5 FPS without slowing.

It features the same native ISO range as the base model. With that, it has a native sensitivity range from ISO 100 to 50,000. And, low light performance remains excellent. Users can expect usable images up to ISO 25,600 with minimal processing. And the grain introduced at this value is minimal and pleasing. So it doesn’t take away from the general aesthetic of the camera’s rendering.

As a rangefinder, this camera provides a fully manual focusing experience. However, Leica’s added some focusing aids if you use the camera in Live View. There, you get focus peaking, and touching the screen recalls focus magnification at the selected point. Additionally, pressing the front-facing Focus button also engages focus magnification. Together, these make manual focusing easier, particularly at large apertures. And they’re a great option when shooting on a tripod or at high or low angles.

The camera also automatically magnifies the image in the viewfinder when using M-mount lenses, helping to make focus easier.

It obtains the updated optical viewfinder with a 0.73x magnification and integrated rangefinder from the base model. And it too doubles as a precise lens-coupled rangefinder with sensor size-matched bright-line frames. And it automatically couples the focusing function to compensate for parallax distortion. Plus, it also displays either a split or superimposed (double) field image in the center to help focus accurately. And it has a frame selector on the front plate, letting you adjust the image field to visualize the scene with varying focal lengths. Here you can choose from 35mm + 135mm, 28mm + 90mm, and 50mm + 75mm focal length pairs. Overall, the rangefinder window provides an unmatched emotional connection to the subject and the moment in the most organic nature. And this implementation is currently Leica’s best yet.

It also features a 3.0-inch touchscreen LCD with a resolution of 1.04M dots and a Corning Gorilla Glass coating, protecting it against scratches and light impacts. And this release becomes Leica’s first M-series camera with touch functionality. And it’s a key selling point over the base model, which lacks a touchscreen. Now, users can intuitively change settings and navigate images in the Playback/Review mode. There you can use various gestures like swiping, double-taps, and pinch to zoom to review pictures. But, otherwise, the display itself is sharp, bright, and responsive.

It obtains an essentially unchanged menu as the base model. And the camera doesn’t offer many advanced and niche features, so the menu is rather bare-bones. Even so, the general user interface on this camera remains excellent. And it’s clean, modern, simple, and easy to navigate. As such, newcomers to the system will find it quickly mastered.

It features a programmable Favorites Menu that you can customize to your most-used Main Menu settings.

Physically, it follows a broadly similar design from the base M10, which originally took the line back into the proper direction in ergonomics. And this new release follows suit and becomes an extension by removing the camera’s branding for added discretion. With that, Leica removed the prominent red dot logo on the front of the camera. Doing so makes it more discreet for professionals wanting the added stealth. But they did add the film engraving on the top plate. And it features a marginally slimmer profile that’s more reminiscent of analog M-series film cameras.

Internally, the camera features a brass top and bottom plate, while the chassis uses magnesium alloy. Combined, they provide outstanding rigidity and robustness that’ll likely survive decades of long-standing use. Additionally, the camera also has rubber seals throughout, protecting it from light rain and dust. And this design affords the camera with modest weather sealing. However, this construction does make it a bit on the heavier side at 680g with the battery installed.

Externally, the P is characterized by an iconic industrialist design that follows the original Leica M. And it only provides enough dials and switches for effective operation, but nothing more so that it becomes a hassle. In this case, it offers a rear thumb rest integrated into the backplate. And this thumb rest also has an adjustment dial, which changes the exposure compensation or enables focus magnification. There’s also dedicated ISO and shutter speed dials on the top plate for quick adjustments. Otherwise, there are only three buttons, one for Live View, the others for Playback and the Menu. Together, the physical interface on this camera is minimalistic, streamlined, and quite direct. And it focuses primarily on exposure control alone and a photography-centric experience.

Even so, the design of this camera is excellent. And it’s a sleek evolution to the lineup with a paired down interface that’s discreet and easy to operate. It also pays homage to the film-inspired nature of this lineup and to its original sibling. Yet, remains more discrete.

It has a built-in Wi-Fi module, which lets the camera wireless share images and provides remote operation from a linked device via the Leica M app.

It has a hot shoe for interfacing with flash units at a top speed of 1/180 sec.

It has interval shooting to create time-lapses.

It has exposure bracketing, and you can select either three of five-shot brackets and the exposure difference between each.

It has Exposure Clipping, which you can customize to adjust the upper and lower limits to judge overexposures.

It obtains the Level Gauge, a digital level, to level the horizon properly.

This camera doesn’t have any video capabilities whatsoever. Instead, it’s strictly a photography camera.

As a rangefinder, it lacks autofocusing. Instead, you will focus manually.

It lacks a tilting display. Instead, its display is fixed to the rear plate. And this design isn’t helpful if you shot a lot of high or low-angle shots.

It lacks an electronic viewfinder, and Leica hasn’t integrated an EVF as Fujifilm has with the X100 range. Thus, if you want any EVF functions, you’ll have to purchase the optional Visoflex Viewfinder. But, this accessory connects to the hot-shoe in the center of the camera. So it does take away from the rangefinder experience. And it’s also quite expensive. Even so, it can save time capturing critical moments.

Also, depending on your prescription, you may find it difficult to see all of the frame lines in the viewfinder. The eye relief is good, but getting accurate framing when wearing glasses is tricky.

The touchscreen doesn’t support menu navigation. Instead, you’ll have to use the d-pad.

The camera’s matte finish is easily scuffed and marked, which reduces its aesthetic value over time.

Unlocking the ISO dial takes some force, as the dial is incredibly stiff. There’s a particular technique to it, but it will take a bit more force to unlock than other M-series cameras with a similar design.

Both the battery and SD card are in the same compartment underneath the camera. And this positioning means you’ll have to first remove the tripod plate to change either, which is tedious.

It lacks the wrapped drive selector switch from the M Typ 240. Instead, these settings are changed strictly through the menus alone, slowing workflow. Having access to the camera’s continuous shooting modes saves time capturing one-off situations, say a moving car.

It lacks in-body image stabilization. So you will have to use optically stabilized lenses instead.

It only has a single SD card slot, which is also the slower UHS-I standard.

It lacks built-in GPS. And it also lacks Bluetooth connectivity. So without it, the Wi-Fi connection is slightly hit or miss and not always consistent. And there’s no way to geotag images in-camera.

It lacks a microphone input.

It lacks a headphone output.

It lacks an HDMI port.

It lacks a USB-C port. And the battery charger doesn’t use USB-C either.

This camera is too expensive for beginners. If you want a beginner-friendly Leica, consider the T or M2 cameras instead.

Current Leica M Typ 240 owners should consider upgrading, particularly if you want the quieter shutter, touch functionality, and better high ISO performance. Together, these improve the camera’s versatility and make it a worthy upgrade.

Current Leica M owners shooting film should consider this camera if they want something similar but digital. It provides a broadly equivalent shooting experience but brings all of the benefits of digital capture.

In the end, Leica’s M10-P is quintessential Leica. And it embodies the full M-series into a single digital package. So, it becomes the ultimate Leica M camera. Yet, one that follows the line’s heritage while simultaneously refining the shooting experience. And it offers a classic photography experience that is unrivaled amongst other digital cameras.

Ultimately though, it’s a camera for the ages and targets a specific audience that values legacy and iconic design. But, thankfully, it’s the most accessible M in the lineup to date. So if you love the feel of Leica’s analog M series but want to get the added benefits and convenience of digital photography, here’s your camera.

Like all Leica’s, the M10-P targets a small niche audience of hardcore photographers who value the experience and iconic design. Even so, it’s an excellent release that makes a notable jump over the already popular M10. And it refines this legendary lineup.