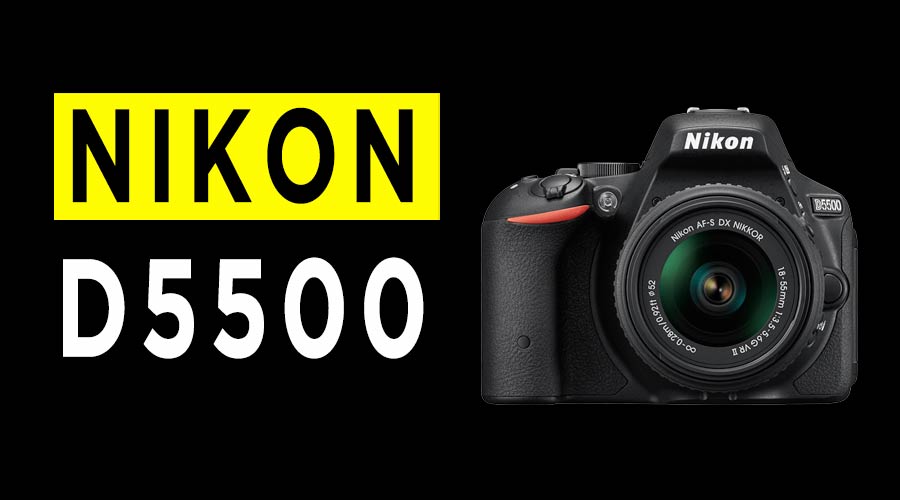 Initially released in the spring of 2015, Nikon’s D5500 marks the official successor to the previously released D5300. It’s a camera that sits in their advanced entry-level range and their mid-tier lineup. It’s more advanced than their more entry-level D3000 series, but not so advanced that it’s cumbersome, difficult to use, and bulky.

Nikon aims this camera directly at beginners, amateurs, and enthusiasts looking for a step up in image quality. On paper, it promises only minor improvements over the outgoing D5300, but it’s additions look promising.

But, even still, are these additions enough to differentiate this camera in such a tricky market? Can Nikon compete with likes of Canon T6s and Sony’s a6000? Does this camera offer enough to keep enthusiasts hooked on the ever-fading SLR market? Today, we assess its strengths, weaknesses, and see if this camera remains a relevant contender in the age of the mirrorless camera? Let’s find out.

What are some of the goods, bads, and uglies of the Nikon D5500?

It features a 24.2MP CMOS sensor without an Optical Low Pass Filter (OLPF) and the EXPEED 4 image processor, a similar configuration as the predecessor. However, Nikon has redesigned the sensor, and the camera now provides better low light high ISO performance in both RAW and JPEG though this improvement is rather incremental and not ground-breaking.

Nevertheless, image quality overall remains excellent. Images are sharp, the colors are accurate, and the camera offers an exceptional dynamic range. Users have immense flexibility to recover shadows and details. The camera provides upwards of 5 stops of latitude, outperforming some of the full-frame competition nearly twice its price, in this respect.

It provides a continuous burst rate of 5 fps, the same speed as the predecessor. However, the buffer depth is quite good. It offers 100 JPEGs before filling. Though, RAW shows a slow down after 6 images.

It shoots 1080p full HD videos up to 60 fps for slow-motion video. And it shoots video in the MPEG-4 codec to the MOV format. While this is the same as the predecessor, Nikon has now added the flat picture profile, a borrowed feature from the D750, and welcomed addition. This profile lends the captured footage to better grading and other post-processing adjustments, as it protects the highlights, contrast, and saturation. Overall, the camera’s video quality is excellent. The footage is sharp, free of moiré or compression artifacts, and colors are accurate.

Like the predecessor, all of the camera’s effects and filters work in video mode.

It features a clean live HDMI output for use with external recorders.

It features a native ISO from ISO 100 to 25,600. And the previously expanded setting of 25,600 is now in normal range with this camera. Overall, low light performance is good. Users can expect usable images and videos up to ISO 3,200.

It inherits the same 39-point AF system with 3D-Tracking as the predecessor, where 9 of the points are the more accurate cross-type compatible points. And this is still a large number of points and coverage considering this is an entry-level DSLR. Overall, autofocusing performance using the viewfinder remains both fast and accurate.

For those who prefer manually focusing, the camera features focus magnification, and the touchscreen centers the magnification at the desired point.

It uses the same EN-El14A battery as the predecessor. However, Nikon has improved the battery life, and it’s now rated at 820 shots per charge, a notable improvement over the predecessor 600 shot lifespan.

It features a 3.2″ vari-angle TFT touchscreen LCD with a resolution of 1.03M dots. While it’s resolution and articulation are the same as the predecessor, its touch sensitivity makes it the first Nikon SLR to obtain this feature. The touchscreen delivers a lot of the usual benefits such as touch focus, touch shutter, pinch to zoom, on-screen control, and full menu navigation.

However, it also doubles a customizable button, and it offers several helpful assignable functions when it’s off. When composing via the viewfinder, the left side of the screen disable, and the right side is fully configurable. You can set it as an AF touchpad, HDR, or change ISO or white balance, to name a few. This implementation takes the standard touchscreen a step further than the competition and is a welcomed addition. Overall, the touchscreen is sharp, bright, responsive, and the viewing quality and angles are superb.

It inherits the optical viewfinder from the predecessor with 95% frame coverage and moderately large 0.82x magnification. However, it also includes a proximity sensor, which disables the LCD as the eye approaches to reduce unwanted glare when composing and sporadic touch input. It also displays grids, which is useful when composing landscapes. Overall, the viewfinder remains on par for the standards for the class.

It features standard Nikon menus, which are intuitive and easily mastered. Nikon’s slightly redesigned the menus, moving from the outgoing vertical interface that was a bit small and hard to see. But, overall, the interface is well-organized and highly optimized for touch input.

It features a programmable function (FN) button, which you can set to ISO, among other duties.

It features helpful on-screen information using the (?) button, which brings up a help feature to provide tips about various settings on the camera. This feature is context-sensitive and generally helpful, though it doesn’t give any insight on greyed out unavailable features.

It obtains the recent setting menu for quick access to the most used menu settings on a single page.

It provides the Quick Menu, accessed via the (I) button, for immediate access to all critical shooting settings on a single page. And this menu still offers helpful icons to show beginning users a visual representation of what settings are changing.

Compared to the predecessor, the camera is now both smaller and lighter, coming in at 420 g. Overall, it’s only a 60 g difference, but it’s noticeable. The camera is also slightly redesigned, now slimmer than before, creating quite a compact DSLR for this price.

The buttons on the top plate are thinner too. But, the most notable change is the redesigned grip, which takes cues from the higher-end D750, and now gives far more surface area to purchase. It makes the predecessor’s grip look hilariously shallow in comparison. And, overall, the camera delivers a more premium feeling and superior ergonomics. The physical controls the camera uses are well placed, and the layout is simple but intuitive. Outside of this, the build quality remains the same and is good.

The exposure compensation button doubles in functionality to also control aperture, a nice touch. When we couple this with the cameras programmable FN button to change ISO, advanced users will rejoice at the immediate exposure control offered.

It has built-in Wi-Fi, which allows users to wirelessly transfer images and remotely control the camera from a paired smartphone.

It has a built-in pop-up flash.

It has a microphone input.

It has built-in exposure bracketing.

It’s USB port also doubles as an AC input for continuous power via the EG-5C adapter from a wall outlet.

It features a built-in intervalometer for time-lapses.

It features an extensive retouching menu for RAW processing and movie editing. You can apply effects, crop, resize, trim, and even grab frames from a video recording.

When recording in 1080p at 60 fps, recordings are limited to 10 minutes, and 30 fps to 20 minutes. Typically, these frame rates are limited to 29 minutes and 59-seconds, which is the industry standard.

The focusing performance in Live View is painfully slow, jittery, and isn’t smooth. The camera hunts and double-checks focus every time before locking, and, overall, it’s not particularly strong when it comes to using continuous AF in Live View or recording videos. The mirrorless competition is far superior in this regard. Thus, manually focusing is best while rolling, and this system is best for achieving focus between shots.

Advanced users may find the lack of physical controls slightly frustrating, as much of the camera’s operations occur via the mani and quick menus. If you’re accustomed to direct access to controls, making these changes, even with the convenience of the touchscreen, will slow your workflow considerably.

While Nikon has redesigned the grip, those with larger hands may still find it uncomfortable and too tight.

The camera lacks an internal focusing motor, which means it doesn’t support autofocus with older non-AI or AF-D Nikkor lenses. Instead, it relies on using the lens’s built-in autofocusing motor.

Unlike the predecessor, it lacks GPS. If you desire this functionality, you can purchase the GP-1 external adapter.

It lacks a headphone input.

Like many entry-level Nikon cameras, this camera doesn’t allow users to change the aperture in Live View or during video recording when using manual exposure. Instead, to change aperture, you must first exit Live View, make the change, and restart recordings, which proves to be incredibly tedious during practice.

The camera lacks a live exposure preview during Live View. The image on the rear screen maintains a constant exposure and adjusts itself automatically. With that, users can’t gauge the exposure of an image and get visual feedback by merely looking at the screen alone. Instead, you’ll have to rely on the exposure meter and review images in playback.

Yes. It makes an excellent choice for beginner or first-time users. And it’s quite a capable camera. Nikon equipped the camera with sharp image and video quality. And while it’s in a market with fierce competition, it performs admirably in this segment of the market. Overall, for an entry-level DSLR, it creates quite a compelling package. It handles great, the touchscreen implementation is excellent, and the updated design delivers a notable improvement. While it hasn’t necessarily revolutionized the existing capabilities of the D5300, Nikon stayed true to a proven platform.

With its exceptional dynamic range and ability to recover details during post-processing, it’s a strong contender for landscape and architecture photography.

It’s also a decent choice as a hybrid camera for those looking to film video casually. It provides sharp 1080p 60 fps videos, a fully articulating touchscreen, and a microphone input. These combine into quite the capable package, albeit manual focus is required to take advantage of this setup.

Current D5300 users and below should consider upgrading. The touchscreen, improved ergonomics, and superior battery life make it a worthy upgrade.

In the end, the Nikon D5500 is a modest improvement over the predecessor and mostly an incremental update. However, the updates provided do culminate into the better of the two cameras, and a worthy update nevertheless.

The improvements in the ergonomics, touchscreen interface, and battery life make an already good camera that much better. Nikon aims this camera directly at enthusiasts and beginner photographers, and it’s undoubtedly an excellent choice for this target audience.

If you like the SLR form factor, this is a camera to consider and a solid all-rounder platform. Nikon upped their game with this camera and it remains one to watch.

Sure, the D5500 is a modest improvement over its predecessor. But, the updates and refinements provided culminate into the better of the two cameras. Nikon updated an already solid camera, to make it a competent all-rounder, despite the tough competition.