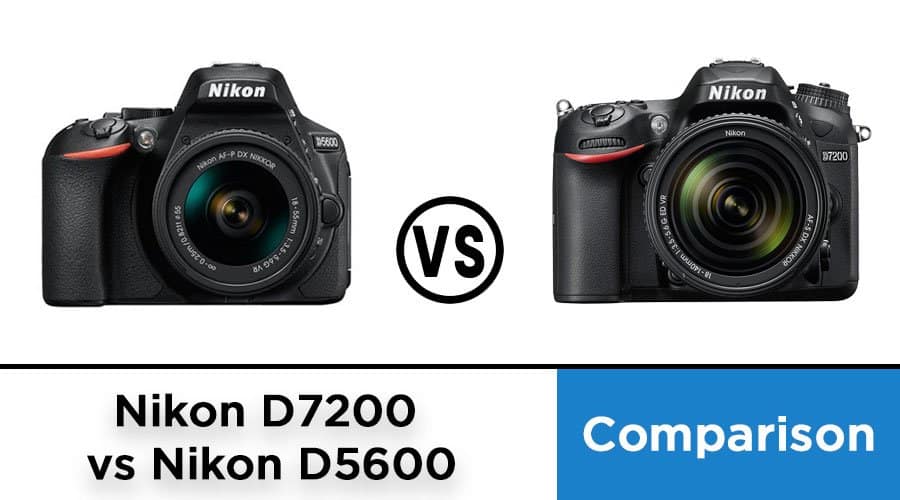 In today’s post, we will compare two popular upper mid-range digital SLRs from Nikon, the Nikon D7200 and D5600. We will cover the key differences between these two cameras to help you understand which is best suited for your needs. Each camera provides several key advantages over one another. However, not all of these advantages will be important to your shooting demands. So then, of these two cameras, which is the best choice for you? Let’s find out.

Physically, the 7-series is both larger and heavier than the 5-series. It measures 135 x 106 mm at 675 g compared to only 124 x 97mm at 415g. These figures equate to approximately a 15% increase in size and 40% in weight, which is immediately noticeable when holding each camera. Since the 5-series the substantially smaller, it makes it the better choice for those who desire a more compact and smaller form factor.

Both cameras have the physical controls expected on this range of digital SLR cameras. However, the 7-series offers additional options that deliver greater versatility for those who prefer manual control. First starters, it provides dual control dials, which provide immediate access to adjust exposure. Thankfully, the 5-series offers the unique ability to configure the touchscreen as a virtual dial using swipe gestures. This ability largely mimics the addition of a dedicated wheel, though not quite as convenient. Secondly, the 7-series features two programmable shooting mode presets, U1 and U2, allowing users to preset shooting settings to the Mode dial.

The 5-series lacks this particular functionality altogether. Thirdly, the 7-series offers a Drive Mode selector that surrounds the Mode Dial, for direct access to shooting speed. Overall, the 7-series features more niche functionality that best tailors it towards a more semi-professional crowd of shooters or those who prefer added manual controls. Otherwise, both cameras provide identical physical buttons, though their placements vary.

While cameras feature 3.2-inch TFT LCD screens, the 5-series provides more versatility as it offers both a vari-angle and touch-enabled display. The 7-series, however, provides greater resolution at 1.23M dots instead of just 1.04M dots, but it lacks both of these features from the 5-series. Unfortunately, its fixed screen offers virtually no flexibility when shooting and becomes somewhat limited in comparison. Overall, the 5-series delivers a far superior display, hands down. Its trade-off in resolution is quickly overshadowed by how helpful those additions are during everyday use.

The 7-series does, however, offer the noticeably better optical viewfinder. In this case, it provides a better magnification, 0.94x compared to 0.82x, and 100% coverage of the frame instead of 95%. These changes allow the image in the viewfinder to be both larger and now represent the entire field of view. Showing only 95% of the horizontal and vertical frame means what you see when composing doesn’t represent what the sensor captures. While subtle, it does make a difference.

The 7-series also features a top deck control display, which serves as a secondary display to display critical shooting parameters. The 5-series doesn’t include this feature.

Both cameras feature 24.2-megapixel CMOS sensors without an Anti-Aliasing (AA) filter, allowing them to provide a subtle edge in resolving fine details though at a risk of moiré occurring in certain scenes. Overall, both deliver sharp images with excellent color rendering and sufficient dynamic range.

Both cameras shoot full HD 1080p video up to 60 fps with identical recording limits (based on recording quality) that varies from 10 minutes to industry-standard 29 minutes and 59 seconds. Overall, in both video capabilities and quality, there are no differences between these two cameras.

In autofocusing performance, the 7-series offers the superior system, now moving up from the 39 point system of the 5-series to 51 points. This increase in total coverage also brings along more cross-type compatible points as well, now moving from 9 to 15 points. Overall, the AF system in the 7-series delivers improved tracking performance and better coverage of the image area, though not drastically.

In battery longevity, the 7-series offers a whopping 1,100 shot per charge lifespan compared to only 970 shots in the 5-series, which is approximately a 13% improvement.

Both cameras follow the same traditional logic and design of Nikon. With that, previous users will feel right at home with either camera. However, the addition of the touchscreen on the 5-series provides the added benefit of menu navigation and significantly simplifies interacting with the camera. Overall, that addition alone makes it the better choice for those looking for a more intuitive navigation experience.

Both cameras feature wireless connectivity, allowing users to connect to a smartphone device using the SnapBridge app for wireless control and image transfer.

In continuous burst shooting, the 7-series takes the lead by offering speeds of 6 fps (7 fps if using the 1.3x crop mode) while the 5-series maxes at 5 fps.

Both cameras have interval shooting functions and can also record in-camera time-lapse movies.

Only the 7-series offers a headphone input to monitored captured audio.

Only the 7-series features dual SD card slots, which makes it the ideal choice for those who desire redundancy or extended shooting.

Overall, the only real advantage the Nikon D5600 offers is the articulating touchscreen. Otherwise, the D7200 is the far superior camera in nearly every comparable measure. However, considering the value that single addition adds for those who are content creators or shoot at extreme angles often, then it is undoubtedly the better choice. That addition alone will be enough to justify skipping the higher-end camera. Otherwise, if you can live with the fixed somewhat archaic screen, to today’s standards, then the D7200 is the best overall choice between these two particular cameras.