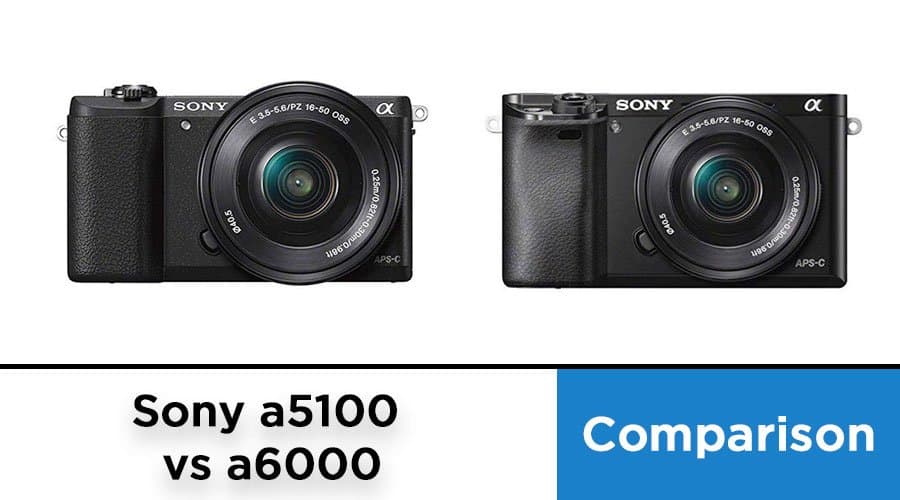 In today’s post, we will compare two APS-C cameras from Sony, the a5100, and the a6000. Both are entry-level interchangeable lens cameras, which share much of the same core imaging capabilities. However, each tailors towards very different demographics of users. Today, we will discuss what separates the two cameras, and ultimately which is the best choice for you.

The 6000 series is heavier than the 5000 series, weighing in at 285g compared to 224g, making it approximately a 20% increase in weight. It is also significantly wider and deeper, 120mm x 45mm compared to 63mm x 36mm. In hand, these differences are negligible, however.

Both cameras differ here as well. In this case, the 6000 series features a deeper and more pronounced grip, making it more comfortable during prolonged use. However, the 5000 series does offer a dedicated SD compartment, unlike the 6000 series, which houses the SD in the battery compartment.  Sure, you may see this as a small change, but it removes much of the frustration that occurs when trying to change SD cards when mounted on a tripod quickly.

It also features two custom buttons, C1-C2, which become useful when you desire quick and immediate access to the customizable functions they support. Unfortunately, the 5000 series thoroughly lacks custom buttons. Instead, its features are solely accessible through the camera’s main menu.

Both cameras feature identical rear LCDs in size and resolution, where both offer 3.0-inch screens with 921K dot resolutions. The differences, however, comes in their articulations and functionality. In this case, the 5000 series offers greater versatility by allowing users to flip the screen 180° to have a front-facing view. The 6000 series, however, only tilts 90° or 45°, making it somewhat limited in comparison. Not only that, but the 5000 series also has a touchscreen LCD, which provides users the ability to perform touch shoot and touch focus, a necessity in today’s age.

Both cameras share identical 24.3-megapixel Exmor CMOS APS-C sized sensors and the powerful Bionz X imaging processor. Therefore, there are no differences in the available image quality between both cameras. Not only that, but their 24-megapixel sensors also leave ample room for cropping in post, as well as sufficient detail for larger format printing.

Since both cameras share the same sensor, the available video quality in sharpness, color rendering, and dynamic range are also identical between both cameras.

Both cameras shoot 1080p full HD video up to 60 frames per second, and neither have 4K recording. Their video recording times are also both capped to 29 minutes and 59 seconds, industry standard. The only minor difference is the 5000 series features a unique mode called Dual Record Mode. Dual Record enables the camera to simultaneously save a lower quality video file for social media use when recording. Subtle but helpful.

Both cameras also feature an identical autofocusing system, and both inherit Sony’s renown hybrid phase-detection technology.  In this case, they both include 179 total AF points, where 25 of these are contrast-detect points. The only minor difference is the 6000 series claims slightly faster AF performance. Worth mentioning. Still, the difference is too subtle to see in real-world applications.

The battery life on the 5000 series is surprisingly better. Unexpected considering this camera includes a touchscreen display, which historically reduces battery performance. Sony rates it to deliver upwards of 400 images on a single charge, while the 6000 series only offers 360. Nonetheless, both cameras supersede the 350 shot battery life industry-standard we expect on compact mirrorless cameras of this size, however.

The 5000 series lacks a quick access function menu, typically accessed via the FN button. The function menu provides immediate access to a breadth of shooting components, all accessible through a single button. Though this camera lacks this functionality, the actual features expected in this menu are not lacking, they’re just not readily available in a separate menu. In this case, however, it does make finding some of these parameters more challenging than it is on the 6000 series since it keeps this functionality.  Though, the 5000 series doesn’t necessarily aim at an audience that typically requires this level of immediacy or customization. However, if you are a user who prefers to have a single dedicated menu for a breadth of shooting parameters, this may be a deal-breaker for you. You will find yourself digging through the menus much more than usual.

Besides customization, the actual user interfaces and menus are quite similar between both cameras. Though not entirely identical as the 5000 series features less physical controls and dials. So, instead, much of its functionality transitions to the menus. With that, any variations between both cameras in this regard are merely due to physical differences, not capabilities. Overall, both deliver adequate menus and interfaces, though not exceptional.

A critical difference between both cameras, and a potential deal-breaker, is the lack of a Multi-Interface (Hot) Shoe adapter on the 5000 series. The Hot Shoe allows the camera to interface with more advanced flashes and other on-camera accessories (video lights, triggers, or microphones). Since the 500 series lacks this adapter altogether, it means you’re stuck using the built-in flash and without the possibility of adding ancillary accessories. This may or may not be relevant to you, but surely worth considering.

Continuous shooting burst rate performance is another area the cameras separate. In this case, the 6000 series delivers faster performance offering speeds upwards of 11 frames per second for a total of 5 seconds. The 5000 series, however, provides a slow burst rate of only 6 frames per second, but a deeper buffer of 20 seconds. Overall, while it has a slow burst rate, the deeper and longer-lasting buffer makes it a better all-round performer. Assuming longer bursts are important to you. If you want a faster but shorter bust, the 6000 series is best.

Both cameras offer Wi-Fi and NFC, which deliver excellent wireless functionality. With that, both can share images to a connected mobile device and support remote control.

The 5000 series lacks an internal sensor cleaning mode, strange. It only has Charge Protection Coating on its optical filter. The 6000 series, however, has the standard ultrasonic vibration mechanism expected on mirrorless cameras to shake of loose dust.

The best choice will depend primarily on how you shoot. If you feel the additional physical buttons, customization, faster bursts, viewfinder, and the ability to use on-camera accessories are essential to you; then the a6000 is best. For some, the lack of function menu and custom button alone is enough of a reason to get the higher series camera, as it significantly reduces the amount of time spent digging through menus. The 6000 series provides far greater versatility and flexibility in customization. However, if you don’t care about extra buttons and shoot mostly in automatic modes, definitely go for the a5100. The reality is it solves a good number of lacking features from the 6000 series, namely the addition of a touchscreen and better articulation. And most beginning photographers don’t typically need the level of customization and functionality offered by the 6000 series. Overall, it makes a better-suited camera for the beginning photographer and provides ample value with all the core functionality needed. Sure, it lacks a viewfinder and Hot Shoe, but it’s still an excellent all-round camera for the price.